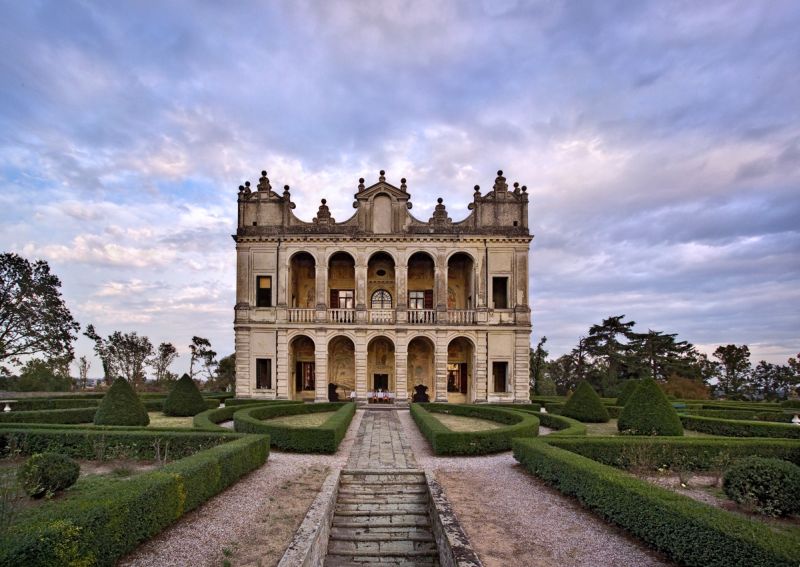 On the hilltop of Montecchia in the Regional Park of the Euganian Hills some 40kms from Venice and 20kms from Padova and Vicenza stands the Villa Emo Capodilista, a masterpiece of Italian architecture and one of the most original amongst the Venetian villas. The Villa, from the day of its conception, has always remained in the same family and today, for the first time, it is available for exclusive vacations for those who appreciate art, history and the enjoyable Italian ‘Buon Vivere’.

Originally a hunting lodge built in 1568, the Villa was the brainchild of DarioVarotari, a painter and architect, pupil of Veronese. The building is based on a square plan that is repeated in the internal distribution of the rooms: four on the ground floor and four on the first floor, connected by a splendid staircase composed of four flights in the Greek cross-formation. The rooms are decorated in mannerist frescoes with scenes from mythology and ancien history, putti, grotesques and vignettes.

The facades of the Villa are enhanced by a pair of playful and theatrical loggias that overlook a grand and pleasant park, in particular the view to the West is over the attractive 27 hole Golf Club La Montecchia. The renowned Restaurant La Montecchia, runned by the Alajmo’s family, is in the Club House and has recently achieved the prestige of a Michelin star. A few km from the villa the restornant Le Calendre, managed by the same family, is one of the three Italian restaurants awarded with three Michelin stars.

As you enter the main gate, at the foot of the hill, you can see before you on the slopes and down on the plain, the flourishing vineyards of the Conte Emo Capodilista estate from which a superb wine is produced. In 2009 it was awarded with the Tre Bicchieri award of Gambero Rosso and is often mentioned by the wine expert Robert Parker Jr.

Villa Emo Capodilista is an incomparable historic palazzo with matching facades and Renaissance symmetry that befits the region’s sumptuous Palladian villas that are sprinkled throughout the area. It was designed by Dario Varotari, a Paduan architect and painter, a pupil of Veronese. It was built in 1568 as an opulent hunting lodge for the aristocratic Capodilista family, and it still belongs to a direct descendan of this family who completed the restoration in 2008. The villa has been completely and meticulously restored, and was featured in the film The Merchant of Venice with Al Pacino and Jeremy Irons.

Located in the prestigious 6th arrondissement between Boulevard Saint Germainat…