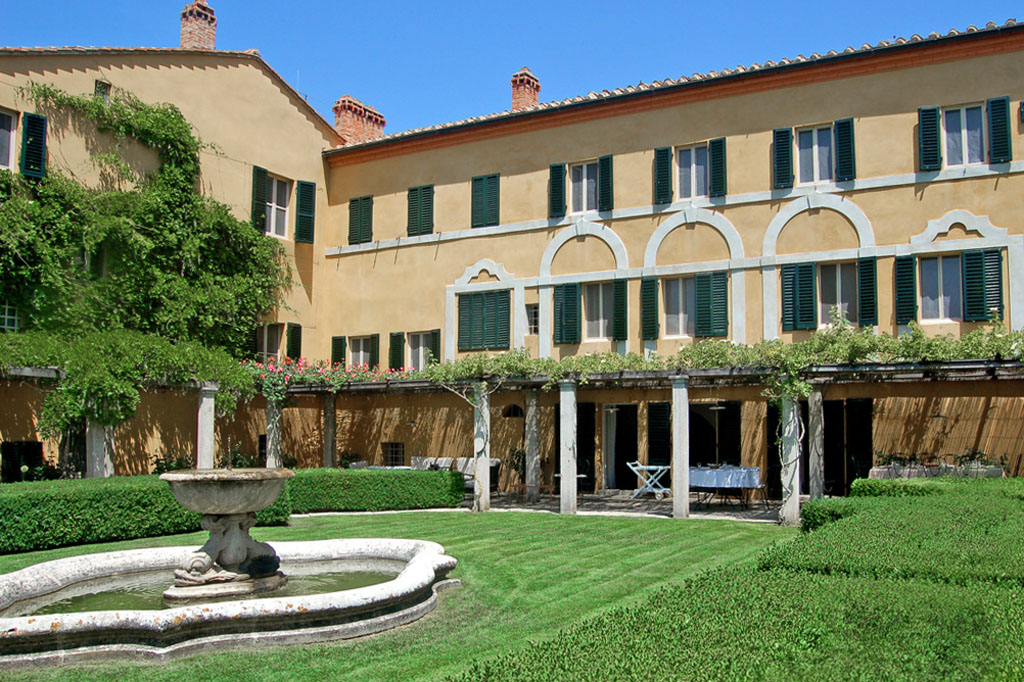 Villa Foce is the epitome of Tuscany.

An estate built on three levels, packed with old-world charm and filled with beautiful heirloom furniture, books and paintings.

All rooms have stunning views over the classic garden and valley.

The style is imaginative and opulent. Situated only a few minutes from the spa town Chianciano Terme and amidst glorious rolling countryside near the wine villages of Montalcino and Montepulciano, the whole property provides absolute peace and tranquility.

Set in 4 hectares and dating back from the 17th century, this classic and lush Tuscan garden is divided into geometrical rooms by box hedges and lemon trees in terracotta pots.

Gentle terraces climb up the hill, where cherry trees, pines, and cypresses grow among wild thyme and rosemary.

A long avenue of cypress leads to a stone statue.

Through the woods, a path joins the garden and family cemetery, considered one of Cecil Pinsent’s best creations.

After a stroll through the garden with your glass of Brunello, guests can cool down with a dip in Foce’s  inviting swimming pool.

Daily cleaning of the houese

Bath courtesy set and hairdryer in every bathrooms

The village of Montalcino, home to the famous Brunello di Montalcino stands hilltop covered almost entirely with vineyards and at its centre signature examples of Medieval architecture:the Palazzo dei Priori and the wonderful Rocca fortress, built circa XIV century.

Pienza, not far from the estate, has been declared “Heritage of Mankind” by Unseco and is considered to be the “symbol city” of the Italian Renaissance (as well as famous for its wonderful pecorino cheese).

Montepulciano, in this same area is another charming village, known as the pearl of the 16th century and renowned for the production of wines such as Vino Nobile di Montepulciano.

A few minutes from the Villa lies Chianciano Terme, a famous thermal spa town that dates back to Roman times.

La Foce is owned by the Origo family. Iris Origo (1902-1988), an Anglo-American biographer and historian of international fame, was brought up between Florence, Ireland and America, until she married Antonio Origo and settled at La Foce. The wonderful – though sometimes difficult – years at La Foce are vividly described by Iris, in her two autobiographical books, Images and Shadows and War in Val d’Orcia:

Images and Shadows (London 1970; reissued by John Murray, London 1998 and David Godine, Boston 1999): An autobiography, in which Iris Origo describes her childhood spent between Europe and America, and her subsequent move to La Foce, a large farm in Tuscany. There she shared with her husband Antonio the responsibility of bringing back prosperity to the barren land and impoverished people.

War in Val d’Orcia, An Italian War Diary 1943-1944 (London 1947; reissued by David Godine, Boston 1984): A classic of the Second World War, this diary is an elegantly simple chronicle of daily life at La Foce, a Tuscan no-man’s land bracketed by foreign invasion and civil war. “The Marchesa Origo’s faithful record is one of those precious and rare accounts that give the truth of history with the art of a gifted writer, that bears witness nobly to ignoble times” (Helen Wolff)